My Dad's Christmas during WWII in the Battle of the Bulge 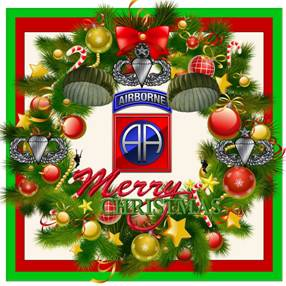 I have told this story before.  It was told to me every Christmas Eve for as long as I can remember.  I hesitated in telling it again this year.  Dad has been gone since 2001.  Since I lived with it every year of my life, so must you.  I carry the torch.

The 82ND Airborne had hastily been sent into battle without winter clothing and without being resupplied.   Most had been on leave after Operation Market-Garden.  My Dad recounted riding into battle on the back of a truck filled with gas cans for Patton’s tanks covered with blankets.  They picked up ammunition from retreating troops on their way in.

Whenever the weather turned cold and snowy here in Illinois, Dad would comment about how someone was suffering from the cold.  I knew he was remembering those he had lost during the war.  He once told me that while heading to the front with a message, he had come across a soldier dead frozen over a machine gun, and he wished that he were him.  He said “His troubles were over.  Mine were still ahead of me”.

77 Years ago, on Christmas Eve, in the Ardennes Forest of Belgium, My Dad, Bob Dumke was serving with the 82Nd Airborne, 2Nd Battalion 505 Head Quarters Company.  Dad was a runner who went from Battalion Headquarters carrying messages to men, his friends, on the front line.  He was in the Ardennes  Forest near the three river bridges at Trois – Ponts in Belgium.

My Parents business was Dumke’s greenhouse and flower shop in Ottawa, Illinois. Dad made grave blankets that he delivered to the cemetery (he made sure there were grave blankets on some young men from our community killed during Vietnam).  Mom would make the most beautiful wreaths and roping.   By Christmas, they were often tired and pretty worn out.  We didn’t have material things living in three rooms behind the greenhouse.  There was much love and many visitors.  Our door was always open to friends. We often added a plate for a visitor at the dinner table.

Our family celebrated on Christmas Eve.  Dad would fondly talk about his Mother Emma, a Swedish immigrant to the USA. How, when he was a child, they would decorate the Christmas tree on Christmas Eve with candles.   How beautiful it would be.  He had a deep love for his mother, who was gentle and kind.  She had passed away when he was just 16 from Tuberculosis.

We put up our tree on Christmas Eve.  Our tree had the big multi-color bulbs.  As we celebrated, Dad would get quiet.  You could tell, his thoughts would be someplace else.  He would pull me up on his lap and whisper in my ear.  His big rough hands would pat my legs, full of gentle kindness.  He would tell me how, during the Battle of the Bulge in WWII, he along with Battalion Headquarters would be moving forward.

They had to move a family out into the cold and snow on Christmas Eve.  There was a mother, father, and two small children.  82ND Battalion Headquarters would use their home.  The home would be near the front line of battle soon.  It would not be safe.  They had to leave their home with only what they could carry on Christmas Eve, out into the snow and bitter cold.  Dad’s voice would crack, with a lump in his throat.  His eyes would well up, and he could hardly get the words out. Tears would stream down his face.  I can still feel his pain.  Every Christmas Eve, for as long as I can remember, he mourned for that family who was displaced by war on Christmas Eve during the Battle of the Bulge in the deep cold Ardennes winter.

Dad had gone to the front, sent guys out on patrol, crawled into a Fox hole to sleep while they were out. The guys threw their blankets and tree branches over him. A phosphorus grenade hit, and he threw the blanket and tree branches off (which he said saved his life) his arms and face were burned, and he was evacuated from the battle.

He rejoined his unit and was with them when they liberated Wobblin Concentration Camp in Ludwigslust, Germany. He told me he saw men alive, and dead stacked like cord wood for as far as the eye could see. Never take freedom for granted.

The past year (or two) have been difficult with Covid as our enemy and deep divisions among people and their political views. I remind you we have more in common then not.  If we take time to let compassion into our hearts and heads the world will be a better place.  Talking to each other and finding our common ground beats doing battle.

I am grateful to be a “descendant of Airborne nobility” per remarks made to me by General John Vines a few years ago.

We will soon gather as best we can with our loved ones. May we remember our soldiers who are away from home, some in harm’s way

Please be safe and hold the memory of our Paratroopers close.  Let not what they fought for be in vain.

Join me and pray that there be peace and love on earth and joy in all our hearts.